A little About Me

My name is Hélène and I’ve been working with animals my whole life. When I was young and still living at home, I wasn’t allowed to have a dog so I trained my cats instead!

During my first foray into the world of animal training, at age 12, I taught my Abyssinian, Selket, to use the toilet instead of a litter box. (Sorry, no photos! And that scheme kinda backfired when she refused to ever use a litter box again, so I don’t recommend it… but I digress).

I got my first dog – a Border Collie named Jake – in 1989 and have been training dogs ever since. Jake and I never did any formal sports or training. Agility was just in its infancy and I had never heard of it, nor did I have access to sheep (living downtown Vancouver at the time).

So Jake and I invented our own games and fun everywhere and anywhere we went. Looking back, we would have totally rocked Parkour, if Parkour had been a thing.

After Jake died in 2003, I adopted my beloved Ross (now 15.5 years old!) from Glenhighland Farm Border Collie Rescue, and became quite involved with the world of rescue. Over the next decade I fostered roughly 50 border collies and mixes, and one Australian Kelpie, working on foundations with each to help them integrate into their new forever homes. A few became permanent additions along the way, until my inn was too full to continue fostering.

During those years I dabbled in nose work, tracking, and Search and Rescue. I discovered agility in 2004, and herding in 2005.  In 2006, I bought my first herding dog, Hannah, who turned out to be a niece of Jake’s. Coincidence? Or serendipity?

And yes, I was so keen to start herding that I took lessons for a year before I even had a dog!

Hannah and I had a very successful career, winning the Ontario novice herding championship in 2008, after just two years of training. We went on to become an Open level team (the top level of USBCHA herding) while simultaneously competing in agility to the Masters level and qualifying for the AAC (agility) Canadian Nationals.

I attribute much of my dog training success to the mix of skills I have learned through cross training. A long-term student of Susan Garrett’s (H360 and Agility-Nation), I have also been deeply influenced by Syliva Trkman, Jenny Damm, Fenzi Academy instructors, and many others in the dog training world devoted to positive reinforcement-based training.

In herding I have taken lessons or attended clinics with Kevin Evans, Michael Gallagher, Scott Glen, and Bobbie Dalziel, among others, and most recently have completed Alasdair and Patrica MacRae’s on-line program.

Today I run a working mixed livestock farm, with sheep, goats, horses, and poultry. Hannah – now retired from competition but still going strong  – is my right hand, and my highly talented bitch, Kestrel (who also has trained and competed in agility) is my left. I occasionally breed now, and have have grown my team of working and sport dogs. In May, 2017, I turned a long-term dream into reality and imported a puppy, Aoife, from Ireland.

My Mission: To build and strengthen the human-animal bond through deep understanding and clear communication, and to share what I learn with others so that they may do the same. I strive to take the most current understanding around learning and teaching, and apply it to my relationship with my dogs and other animals. And I am constantly seeking to improve my skills, and to find new and innovative ways to work with my animal companions.

I am also deeply committed to the philosophy of natural rearing as a major component of dog training, as I believe a clear, sound mind and a strong, healthy body results in a calm, confident, eager to learn animal partner. 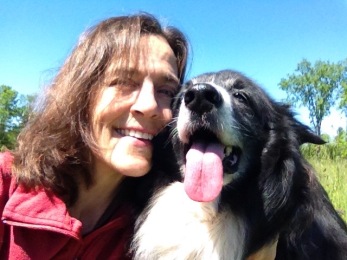 To work with me or join my newsletter for training tips and updates, drop me (Hélène) a note at