Just a very quick note to welcome this little collection of souls into the world.  Born on February 24th, five girls and two boys! 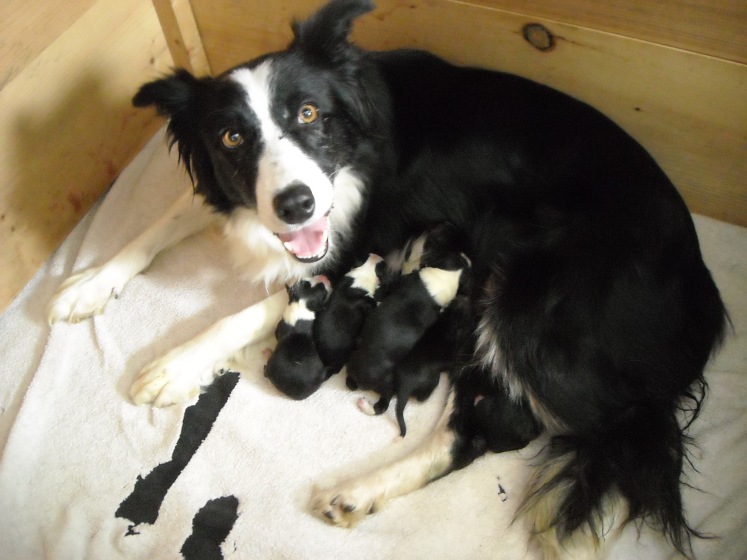 Kes was officially due on Saturday (the 20th), which was the 63rd day after her first breeding.  But puppies don’t count the same way we do!  Puppies are born 63 days after ovulation, not after mating.  And unless you do progesterone testing (which I didn’t), there’s no way of knowing when ovulation took place.

Of course I do now!  It was 64 days ago, or Christmas Eve!  Which is interesting because that was the last mating, and the day that Scout headed home.  After having been here for a week, I figured he had done his duty well.  That last breeding actually caught me by surprise as I thought they were through with the hanky panky.

Sperm can live in the body for up to a week, so she would have been covered even without that final tie.  But likely that final fling for the road was the one that did the trick.

Given that I didn’t know when ovulation took place, I started taking Kes’s temperature several times a day starting a few days before her estimated due date.  A bitch’s temperature will drop a full degree or more about 24 hours before puppies arrive, so catching that drop can give you the warning you need to be prepared.

For nearly a week, Kes’s temperature held steady at around 37.8C, fluctuating up and down by a point or two depending on the time of day or how much activity she had just done.  Then, three days before delivery, her temperature started to bounce up and down between 37.1C and 37.5C.  Each low dip had me excited, followed by a disappointing rise back to normal again.

At 6am she jumped out of her pen and into bed with me, panting hard and shivering.  I lifted the blankets and she climbed under.  I was still half a sleep and hoping she’d let me sleep some more!  No luck there, about 20 minutes later she jumped off the bed just in time for her water to break and flood the floor.  Good girl! 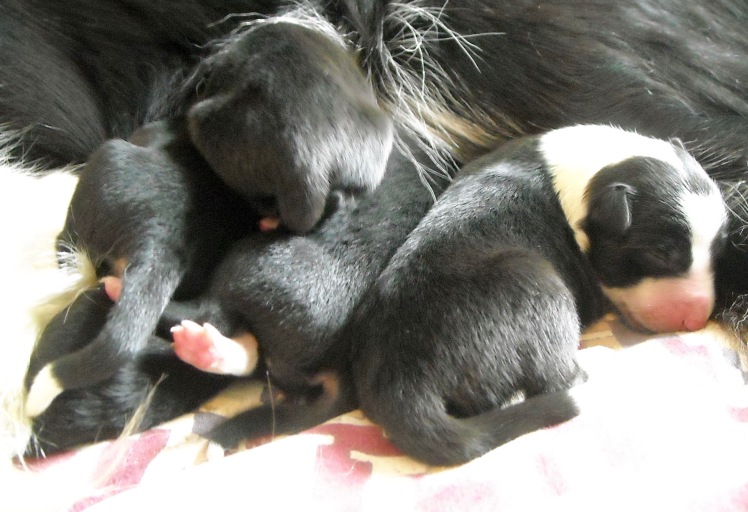 Into the whelping pen we both climbed, and within minutes the first puppy was born.  I was amazed by how easy she pushed that baby out.  It seemed like hardly any effort at all, when compared to human births I have seen.  She just got quiet and looked like she was concentrating hard, and then her tail arched and out came a puppy!

We both worked to clean the baby off and get it breathing.  I had planned to do biotinus measurements – where you place the puppy 2 body lengths from mamma, facing the wrong direction, and time how long it takes the baby to find its way back to the milk bar – a measurement of life vigour – but I couldn’t do it.

It seemed cruel to do anything other than help that new little life to its first meal and the safety of being tacked back against the soft warm belly he had just exited.  So tiny and helpless, I didn’t want his fist experience of the world to be cold, lost, and lonely.  So biotinus testing got chucked!

Instead I made notes about the vigour of each pup as I observe them take their first breath, latch, and nurse.  And to be honest, I am not really sure it tells us much about the life force of the puppy.  Some were born still in their sack, and so were not breathing and needed to be cleaned and rubbed to get going.  Some had the sack rupture in the birth canal, and so came out breathing immediately. It seems to me that this had more to do with circumstance than life force.

Kes went on to deliver five girls and two boys between 6:50 and 11:50 am.  Each black and white with classic border collie markings.  Each perfect, tiny replicas of their parents.  I can’t believe how small they are at this stage, and that in a few months they will be the same size as their mother! 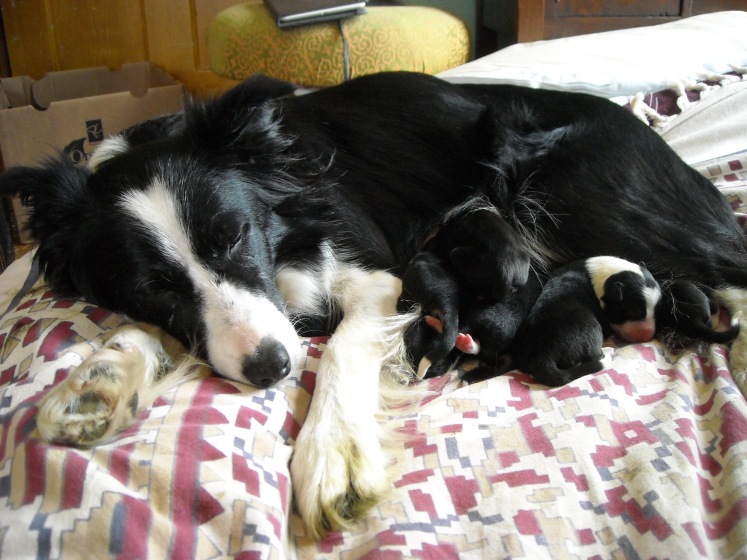