Puppies are now five weeks old.  And they are really puppies now!  No longer simply milk-seeking-missiles, they are becoming highly interactive little personalities in their own right.

Given how incredibly adorable they are (you pick them up and they wiggle and waggle and go to town French kissing your nose), the questions I hear most often these days are “Which one will you keep?  And how will you ever let the rest of them go?”

The answer to the second question is simple.  While I love each and every one of these puppies furiously, I also know that by the time they are 10 weeks old, tail-light red will be my favourite colour.  Already at 5 weeks I am run off my feet trying to keep up with all that these puppies need: socialization, training, stimulation, exposure to sounds, sights, smells, people, animals, textures, foundation training, crate training, clicker training, shaping, imprinting, classical conditioning, and the list goes on!

So, never fear, I will be able to let them go when the time comes.  And it is coming soon.

As for the answer to the first question, I honestly have no idea.  Each one of these puppies has been my favourite at one point or another over the last five weeks.  Because they change so much, every new glimpse into who they are and who they will become has caught my attention and my heart.  I love them all.

I wont be making any decisions until the puppies are over 8 weeks old.  Eight weeks is when you can see what their structure will be like as adults, and structure is important.  These pups are all slated to go to working and/or sport homes, and having the correct structure to support their future careers is as critical as having the right temperament.

When it comes to decision time, I will be looking at the following factors:

For myself, I am looking for a dog who will be able to run my farm and do competitive agility at the same time.  I am also considering future breedings, which does incline me to a female since it’s much easier to find a stud dog than to own one and look for a bitch to mate him to.  Especially given how important it is to me how the pups are whelped and reared.

Going into this I wanted a smooth coated female, but not at the expense of the other factors.  Temperament, health and structure first, then gender, and after that looks and coat length.  Three more weeks, and I should have the rest of the puzzle pieces.  Or at least all the ones I am going to get before having to make up my mind.  Until then, I will treat each one as THE one.  No favourites.  I love them all.

Here is a little update on what I am seeing this week in each pup, along with their 5th week photo.  They don’t look like rodents anymore!

Big, fat, fluffy Griffon.  What’s not to love about this little wrecking ball?  A giant ham, and perfectly marked, he’s the one to catch everyone’s attention.  The swashbuckling rogue all the girls fall for.

But don’t let those good looks fool you.   Right now he is hands down my most energetic puppy.  Yesterday he stayed awake a full 15 minutes longer than any of the others, tearing around the living room, playing tug with everything and anything, and otherwise making it very clear that he’s TROUBLE.  Did I mention that the pups only stay awake for about 15 minutes at a time?  That makes him twice as busy as the rest.  T.R.O.U.B.L.E.

And then there’s Lark.  She’s actually just about as big, and possibly even more fluffy, than Griff.  Only slightly less busy, she has a bright, happy energy about her that is just delightful.  Super smart and easy to train, she’s a clever little girl with lots of energy but so far doesn’t seem over the top like her big brother.

Lark is definitely a chow hound, and will do just about anything for cheese.  She also LOVES to tug!  I think she’s going to be super easy to train, and lots of fun to work with. 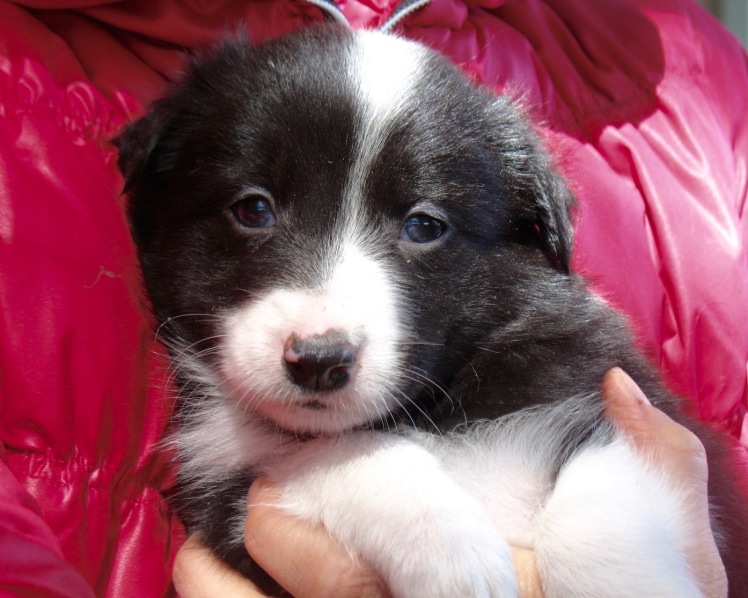 Ah, Cooper.  Coop is a sweet, fluffy heart of a dog who is calm, steady, thoughtful, and very clever.  He’s somewhat the dark horse of the litter, quietly going about his business and wowing me whenever I pay attention.

Did you see the Manding video?  Where after only 2 minutes of shaping training (EVER), Cooper stepped back from the pack and sat, and then when I didn’t notice his lovely behaviour he trotted to the other side of the pile of squirming puppies and plunked his bottom where I couldn’t help but notice his perfect sit?  Genius.

And now for wee Raven.  Like Cooper, she is quiet, thoughtful, and equally quick on the uptake, if not more so.  Generally the first to catch on to everything, I think she observes from a distance, does the math in her head, then knows exactly what to do and when.  I suspect these somewhat subdued puppies are more cerebral, evaluating everything before acting but never missing a beat.

Rave is still the smallest of the bunch, and definitely very smooth coated (which makes her appear even smaller).  She never misses the potty box, knew what to do with the food bowl from the second I put it down, picked up manding lickety-split, and keeps a sharp eye on me wherever I go.  Super Smartie Pants. 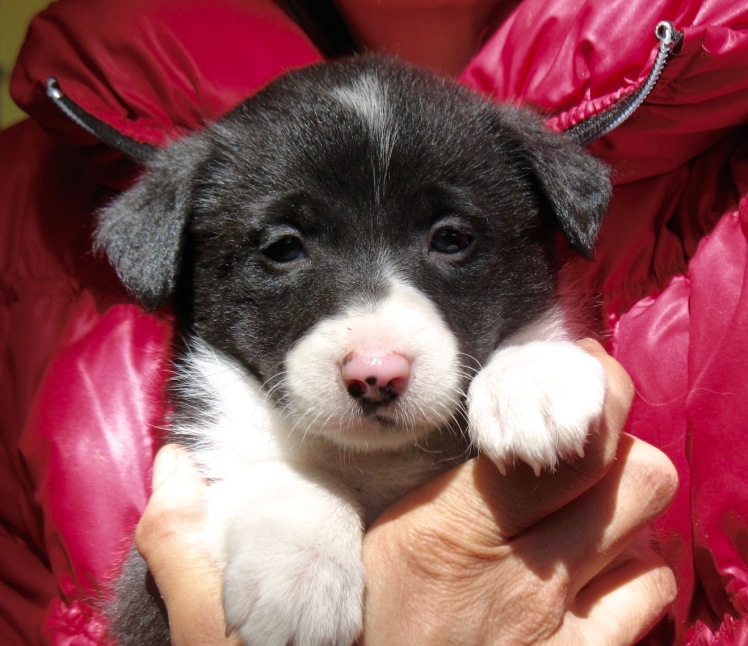 And last but not least, Wren.  I really must get a better picture of her!  She always looks sort of sad and dopey in these shots, and she really isn’t!  She’s just as bright and cheerful as the rest, and smart and sassy and fun.

Wren is this week’s middle of the road puppy, more lively than Rave & Coop, but quieter than Lark and Griff.  She’s been a little nondescript this week, not doing anything to stand out or draw attention, either good or bad.  Middle Puppy.  That’s my Wren.

It’s funny to watch them as a pack.  First they all gallop around, barking and wrestling and otherwise being ferocious little black and white wolves.  After about 10 minutes, Cooper and Raven sack out, usually on top of me if I’m available.  Wren then starts slowing down, but still trots about, chewing on my clothes or a tug.  Meanwhile Lark and Griffon continue to be wrestling fools.  Eventually Wren goes down for the count, and a little while later, Lark comes over for a cuddle and a snooze.

Finally, the Griffinator will stop suddenly and pass out in the middle of wherever and whatever he is doing.  Seriously, I sometimes walk into the room and think he’s dead because he’s just lying in the middle of the floor in some awkward position while the rest of the puppies are curled up snugly in their crate.