Yesterday the puppies held a party.  I acted as coordinator, but they definitely ran the show.  And what fun was had by all!

According to Puppy Culture, puppies at six weeks of age are just primed for learning.  While their thought processes and ability to reason is far from developed, the brains of puppies of this age have almost adult capacity for learning and forming emotional reactions to new experiences.  As such, it’s a great age to introduce them to as wide a variety of controlled positive experiences as possible.

The Puppy Party is about more than just socializing them to new people, although that is definitely part of the program.  I was fortunate to have a wonderful group available to help out, representing different ages and genders, including a man with a beard and two with hats!  All things dogs can find scary if not introduced to early enough.

In addition to just having people come and hang out with puppies, the Puppy Party involves having this group of strangers actually train the puppies.  I had everyone watch the ‘Puppy Party‘ section of the Puppy Culture video, which explains things so nicely it saved me the trouble of doing so (plus everyone gets to watch more cute puppies… and see the ideal puppy party!)

Watching the PC video certainly sets the bar high, with it’s wonderful miniature agility equipment (some day!  after I finish building and buying all the adult agility equipment I need and want), dinner party, and wine for the guests!  I had to do the DIY version, with makeshift equipment, and veggies, dip and (fabulous) banana bread brought by one of the participants, and apple cider.  And my house smelled like puppy pee and fried liver and chicken hearts because there’s just one of me and only so many hours in a day. So definitely a far cry from the perfect party, but I think all had fun regardless and certainly the puppies benefited immensely!

I set up the following four stations: 1) a teeter and balance disk (with a cloth over the disk because the bumps are sharp to such tiny paws), 2) leg jump bumps & tug, 3) a tunnel & chute, and 4) puppy pushups (sit to down to sit).  One person was responsible for each station (the chute required three, one at each end, and one to hold the tube stable as I forgot to put stabilizers on its side).  The fifth station (as I have five puppies) was a rest station, either in my arms or back in their pen. 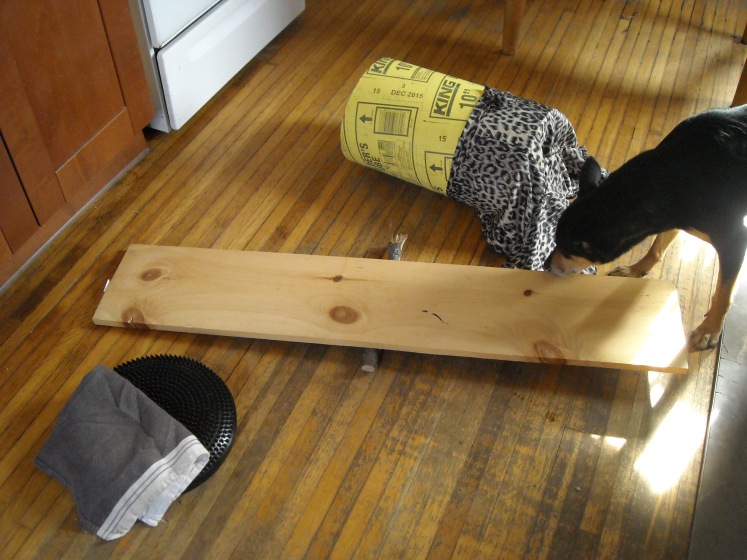 The puppies have never done any of these exercises, so each station was a new learning experience.  They had 2-3 minute per station, and then rotated.  So the whole exercise only took about 15 minutes, but it was 15 very intense minutes!  I only had time to take a little video as I was otherwise buy swapping puppies and checking in with each station handler to see how the puppies faired with their learning.  Here’s a short clip of the fun:

The instructions for the party are to have the puppies go through each station three times, with nice long breaks in between.  However, the puppies had a play session with our guests when they first arrived, and even though they had a good nap while we chatted about puppies, watched the video, and got organized we still had to wake them to do the training.  All pups perked up nicely (the video is taken within a couple of minutes of them waking up, so still sleepy), but they were definitely done for the day after one round of these exercises.

More is definitely not better in this case, so we let them sleep and just went for a tour of the farm.  I think the human side of the equation was rather worn out as well!  Learning takes up a lot of energy, and teaching is just as tiring, if not more so!

The Puppy Party was a fantastic experience and definitely will stay on my repertoire of puppy rearing activities.  Next weekend we’ll be holding a different kind of party (the temperament testing and structural evaluation), but I may host a Puppy Party Round II in a couple of weeks.  Time, energy, and human trainers permitting.